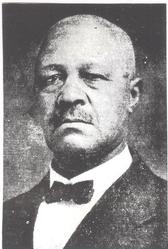 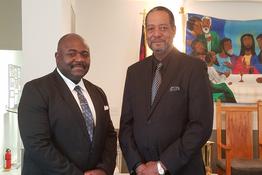 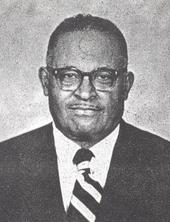 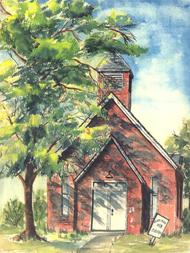 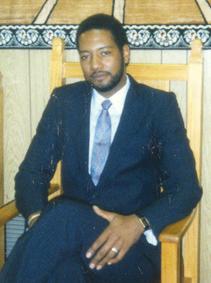 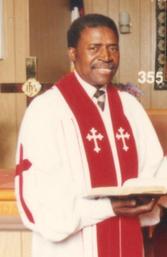 A Brief View of Our History

Our church was first called the Welcome Baptist Church, then Harrison Avenue Baptist Church, and eventually became Harrison Avenue Missionary Baptist Church.  Our incorporation with the State of Missouri is as Harrison Avenue Missionary Baptist Church.
The recorded history that we had was prepared by the late Sis. Mamie Briggs and has been updated over the years.  Through our research, we found information which reports that Harrison Avenue Missionary Baptist Church was organized in 1880.  Several historical documents, including the African American Heritage Guide of St. Louis; Discovering African Americans; and the History of Kirkwood reveal our early existence.  It is also reported that members of Harrison Avenue Missionary Baptist Church helped the First Baptist Church of Elmwood Park to organize in 1900.  At our business meeting on September 18, 1997, a motion passed to accept 1880 as the year of our organization.
The “Welcome Baptist Church” was founded by Rev. Samuel Tyler who was a long time resident of Kirkwood.  The name was later changed to Harrison Avenue Baptist Church.
Pastors who were called and became shepherds of this flock are Rev. Samuel Tyler (Founder), Rev. Billups, Rev. Shields, Rev. W. Monroe, Rev. Leon Hannah, Rev. J.T. Smith, Rev. Samuel W. Jones, Rev. Daniel Jones, Rev. Covington, Rev. Louis Sykes, Rev. Bailey, Rev. Littles, Rev. Fred Wilson, Rev. Robert Johnson, Rev. Clarence L. Wells, Rev. James F. Cobb, and our present Pastor, Rev. Jeffery G. Croft.
Rev. William. F. Bailey served Harrison Avenue for 24 years.  Rev. Bailey was called to a church in California and Rev. Daniel Jones was our next Pastor, followed by Rev. Louis Sykes and Rev. Littles.  Shortly after Rev. Littles became our Pastor, he resigned to accept a call to another church.  Several ministers served for short periods of time, until in approximately 1942, when Rev. Fred Wilson became our minister for the next 14 years.  Rev. Wilson resigned when his health began to fail following a serious operation.  He was followed by Rev. Robert Johnson in 1956, who was called from labor to his reward on January 8, 1957.  His time with the church was short, but the fruit of his labor was abundant.
We had our own Rev. Abraham Byrd who was the Pastor of another church, but as a loyal member of this church he stepped in to help us.  God sent Rev. Clarence L. Wells and he accepted our call in April, 1957.   With the help of Deacons, Trustees, and a loyal membership, Pastor Wells brought new life to the church.    Rev. C. L. Wells served as pastor for 20 years and 11 months.  The Lord called him from labor to reward on March 8, 1979.
Through the guidance of the Holy Spirit, Rev. James F. Cobb was called as our pastor in May, 1979.  Bro. Jeffery Croft announced his call to the ministry on the second Sunday in August, 1988.  He preached his first sermon and received his license on the fourth Sunday in August.   On the third Sunday in April, 1991 with his family, church family and many friends present, Rev. Croft was ordained under the pastorate of Rev. Cobb.  Bro. Gregory Carr announced his call to the ministry on July 21, 1991.  He preached his first sermon and received his license on August 11, 1991.
On December 12, 1991, at our quarterly business meeting, Pastor Cobb announced his resignation as our Pastor effective December 31, 1991 due to his poor health.  He served as our Pastor for 12-1/2 years from 1979 to 1991.  We will be eternally grateful for his love and work at our church.
Acting upon Pastor Cobb’s recommendation, Rev. Jeffery Croft was voted by the members to serve as our Interim Pastor with Rev. Greg Carr assisting him until we called a Pastor.  On June 11, 1992, the Pulpit Committee presented Rev. Jeffery Croft to the membership as the candidate for Pastorship.  The installation service followed on July 19, 1992.  A constant reminder from Pastor Croft is “The Lord is Blessing Us Right Now”.
In 1995, Deacon Darryl Carr announced his call to the ministry.  Deacon John Carr announced his call to the ministry.  He preached his first sermon and received his license on October 8, 2000.  Bro. Antonio Floyd announced his call to the ministry.  He preached his first sermon and received his license on Sunday, May 20, 2008.
On February 6, 2011, Pastor Croft led us as we entered in for our first worship in our new building.  It was what will always be known as our “Super Sunday”!  Going forward our Church Anniversary celebration would be moved from 4th Sunday in September to the 1st Sunday in February in remembrance of our new beginning.

In 2012, we were blessed with two new Associate Ministers and two new Deacons.  In January, Minister John Young II moved to the St. Louis area and united with us.  In July, Bro. Ryan Crenshaw announced his call to the ministry.  He preached his first sermon and received his preacher’s license on August 19, 2012.   Bro. Carl Jones Jr. and Bro. Johnny Thomas joined Bro. Rodney Carr and Bro. Oscar Harris as the Deacons of our Church.  On December 17, 2017, Minister Antonio Floyd was ordained.
The warriors who were strong building blocks for the foundation of this church are looking down on us to continue on as a beacon of light shining brightly to lead those who are lost and seeking the right path to God.  We have a renewed strength and a greater commitment as Christians and Disciples for Christ for generations to come.